It’s no secret that winters in Washington can be long and difficult to get through, especially along the coast. Wind and rain are the norms through the winter months and storms often come in from across the Pacific Ocean pummeling the shoreline. Most Washingtonians don’t let poor weather get in the way of their plans and a common phrase around here is, “there’s no such thing as bad weather, only unsuitable clothing”. So with that, we don our Gore-Tex and muck boots and enjoy the outdoors to the fullest. One common past time for many people around here is rockhounding. Washington has an immense variety of rocks and fossils and while the shorelines are constantly being bombarded with waves, depositing little bits of nature’s treasures, the winter months are the perfect time to go agate hunting! As a child, I remember finding rocks with my dad, not just on beaches, but also along trails and wooded areas close to home. My dad was a geologist and he had an old tumbler that we would use to polish all of my great (and not so great) treasures. I remember the machine would take nearly two weeks to polish a stone, and as a child, it may as well been a million years because I had zero patience and too much excitement. I would frequently check on my rocks, replace the grit every couple of days, and though the process was tedious I look back on it with fond memories. After it was all done, when my rocks were finally finished, I remember most of the stones having a shiny, glassy appearance from being polished but none of them were very colorful, nor did they contain any inclusions or crystalline structures, they really weren’t unique in any way, but they were special to me because they were mine. To this day I still have several polished rocks that my dad and I found and they will always remain special to me. Beth Millner’s pieces containing agates are by far much more beautiful than anything I’ve ever come across, and while the types of agates that are found on the shores of Lake Superior are far different from those on the coast of Washington, they’re very similar in the way volcanism has created them. What I love most about Lake Superior agates is the coloration of rich reds, oranges, and yellows. This is mainly caused by the high concentration in iron oxides that were deposited in the lava flows following the shift in tectonic plates, which created Lake Superior as well as what’s known as the Minnesota Iron Range region. Some of my favorite pieces of Beth’s are those that incorporate the red Lake Superior agate in a copper setting, combining two of the most abundant mineral resources in the Lake Superior area – iron and copper. Not only are the colors warm and rich, the pieces themselves feel like they are a small reminder of industry in the region and exciting geologic past.

It's amazing how much meaning can come from a simple stone. They are little pieces of the Earth that hold memories of the places we have wandered and the loved ones who accompanied us.

This pendant is absolutely beautiful. The workmanship is stunning. The mixture of 18k gold with the super shiny silver is really eye-catching. I have worn it everyday since I received and have had many compliments. The trees and swirling winds depicted in the pendant certainly say Michigan! I also want to thank Jane and Nina for their advice and help. BMJ is fortunate to have such awesome employees.

The pendant was a gift for my daughter. She absolutely loved it as the silhouette of the dog looks just like her rescue dog. 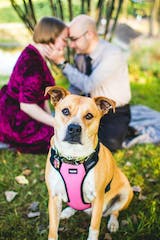