I attended my first ever St. Rocco's Italian Fest in Ishpeming, Michigan in the summer of 2010.

The summer before, my mom married to my stepdad, Bob. He’s originally from Ishpeming and has gone to every St. Rocco’s since he was born. Bob is infinitely patient and kind, he is funny, a Michigan State fan, and loves my kids. I fell in love with him not only because he was perfect for my mom, but because his Italian heritage meant that I got to eat his homemade meatballs and listen to his memories of St. Rocco’s - the food, the dancing, and the game of Mora. (My mom and Bob on their wedding day)

So, the last weekend of July, we packed up two toddlers and a newborn and made the journey to the Upper Peninsula. Even though there were lots of stops to stretch our legs, eat snacks, and do diaper changes (SO MANY of them), I still had butterflies in my stomach as we crossed the bridge into the Upper Peninsula. I have always been fascinated with the U.P. and have often felt that it is where my heart belongs. But now, knowing that I was about to experience all of the many stories I had heard about St. Rocco’s, well, let’s just say the Seney Stretch felt longer than ever.

But, we made it. And our trip was so legendary, we’re still talking about it almost a decade later. (Breslin at the Al Quaal Recreation Area. Needless to say, after our 8 hour trip, he didn’t stand still for long.)

Of course, St. Rocco’s was everything I dreamed it would be. The food was incredible, the culture palpable, and atmosphere was infectious. I learned traditional Italian dances, ate my weight in Trenary Toast, and watch “Papa Bob” get crowned the 2010 St. Rocco’s Mora champion. (My mom and Bob participating in one of the traditional dances at St. Rocco’s)

But my favorite part of the trip by far was on our last day. We pulled into Shiras Park at Picnic Rocks to let the kids run off some steam before the trek home. Breslin and Dharia (3 and 2 at the time) were wide-eyed as we set them down outside of the van. The waters of Lake Superior were calling them and I couldn’t help but giggle as I watched their chubby legs carry them directly to the sand, socks and shoes being shed in their wakes.

It was a perfect summer day. There were blue skies overhead and it was so clear that, as you looked over the lake, it seemed as though you were standing on the edge of the Earth.

It was only a matter of time before Breslin and Dharia had their feet and ankles completely submerged in the water. I could only watch in wonder as their clothes became wetter and wetter, but their smiles got bigger and bigger.

Dharia, in particular, was struggling to hold herself back. Always my adventurous soul, the lure of the water was just too much for her to take. Right there on the beach, for all to see, she stripped herself down so that she was completely naked. And in she went!

By this time, my husband and I were playing “zone defense” to make sure that all the kids were safe and accounted for. I had waded out to be with Dharia, who was perfectly content to immerse herself almost completely in the frigid Lake Superior water. When I turned my head, I saw that Breslin had followed Dharia’s lead and was now skinny dipping too. The joy on their faces is something I will never forget. It was only when her lips started turning purple and her little lips started to quiver that I pulled Dharia from the waves. Boy, was she mad at me! She might have been becoming an ice cube, but she did NOT want to leave that water. I still smile thinking about it.

Luckily, the park had plenty of other things to distract my toddlers from the injustice of their removal from the water. There were things to climb on and slide down. When all was said and done, I had a very tired crew. My Simple Frosted Pebble Hoop Earrings always make me think of that day. Handmade in a store very close to this spot, I can nearly see the rocky shoreline and hear my children’s laughter every time I wear them. And, of course, I am crushing hard on the mixed metal beauty of the Picnic Rocks Pendant. I am so grateful to Beth and the whole team at Beth Millner Jewelry, whose love for the Upper Peninsula comes through so abundantly clear in each and every piece. This “Yooper Love” is something special that I saw for the first time in my stepdad. Now the U.P. has my heart too. I absolutely love her jewelry and ode to the magnificent UP. My husband and I purchased matching wedding bands from Beth (his is a thicker band with the branch pattern) and we just adore them. They have held up beautifully, speak to our love of nature, and we always receive compliments. 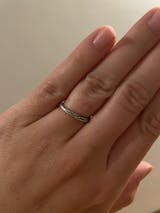 Very pleased with the pendant. I have the ring also and both are stunning!

Love, love, love my loon earings! They're so simple and pretty and great quality. It was super easy to order them and they came very quickly. I have a few pair of Beth Millner earrings and will continue to purchase them!

I love how these fit on my earlobes. They are not heavy but are not flimsy either. I especially love the backs that come with them!! I have had so many compliments on them!